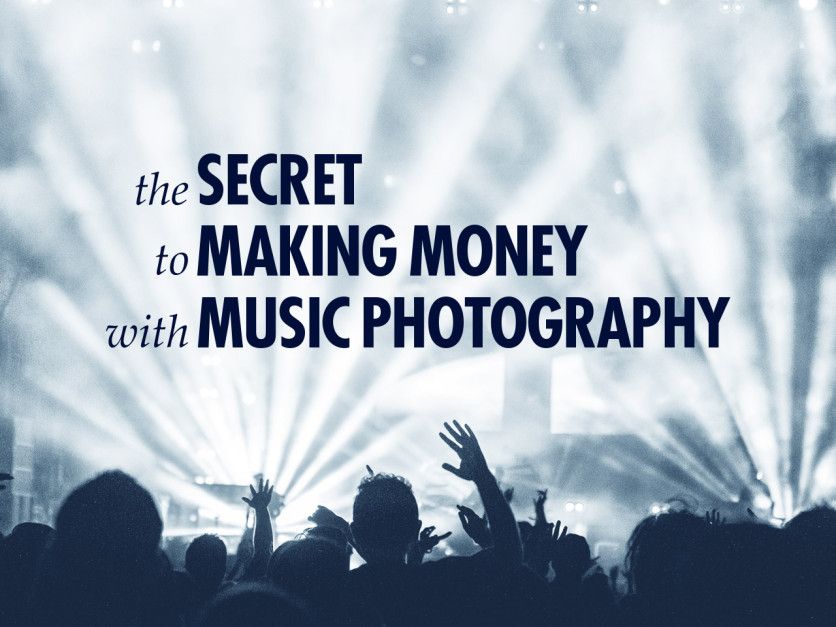 If you’ve been following the music photography industry for any length of time, you’ve no doubt heard some of the horror stories around so-called rights-grabbing contracts, where concert photographers are essentially being coerced into work for hire situations in exchange for the “privilege” of shooting an artist’s show.

Although general public outcry in the photography industry (and in one case, a well-directed tweet) have resulted in a few small victories, concert photographers worldwide are still struggling to come to grips with the harsh reality of providing their services for free, with zero expectation of monetary compensation or even retaining copyrights to their own photos.

So what does all this mean to you? Well, if your primary motivation for getting into live music photography is to try and make enough money to earn a decent living, then you might want to reconsider your options. Not that there aren’t some concert photographers out there making a few bucks shooting for major music publications, or perhaps serving in an “official tour photographer” capacity for a headlining act. But for the most part, those folks are the exception rather than the rule.

You might be wondering to yourself how this is even fair, or whether music photography is somehow unique in this regard….and the simple answer to both questions is “it’s not”. The wedding photography industry, for example, has been impacted by the exact same challenges, and if you pay close attention to the main things that “old school” wedding shooters tend to complain about, you’ll discover quite a few parallels with the gripes of well-established music photographers.

Here’s the real crux of the issue: it used to be the case that professional photographers could easily distinguish themselves from amateurs based simply on the array of expensive equipment at their disposal. In other words, having a “professional” setup granted you a certain degree of exclusivity, and you could therefore generally expect to score the lion’s share of high-paying, prestigious gigs over your inferiorly-equipped competition.

But beyond that, if you happened to be a well-equipped concert photographer in particular, then you could enjoy virtually unrestricted access to the photo pit of just about any show you wanted to shoot. This was because the equipment required for the job (ultra-fast lenses and full-frame cameras) was prohibitively expensive for most amateur shooters, so you had almost zero competition for the best gigs. To paraphrase Joe McNally, your [high-end] camera effectively became a passport— and you could use it to gain access to people and places that would have been completely off-limits to you otherwise.

As a result, the playing field began to level out dramatically, and it was no longer possible to distinguish true “professionals” from amateurs based solely on the quality of their equipment. In fact, you couldn’t even tell them apart based on the quality of the photos there were able to produce, because even the novices could consistently deliver razor-sharp, high-resolution images at the press of a button. The lines between “amateur” and “professional” were becoming more blurry by the day…….and in some cases, completely indiscernible.

And guess what? This is exactly where we still find ourselves today. You can’t just run out and buy a $40,000 Hasselblad and automatically expect to rule the roost because you’ve got a “mac daddy” rig. It just doesn’t work that way.

So what do you do?

Well, if your goal is to build a sustainable business shooting bands & musicians, then I’ve got one simple piece of advice for you. Are you ready for it?

Don’t expect to make any money with live music photography. You’re only going to end up frustrated, and even if you do manage to make a few bucks along the way, it’s most likely not going to be enough to survive on. There are WAY too many people out there who are perfectly happy to shoot shows for free, and then fork over the fruits of their labor for absolutely nothing in return.

And guess what? It’s tough to compete with free.

Instead, do what I did— focus your time and effort on shooting band promos (portraits) instead, and start training yourself to think of concert photography as more of a way to build relationships with your target clientele—not as a source of revenue in and of itself.

Now, allow me to qualify that last statement…I’m absolutely NOT suggesting that shooting live shows is a complete waste of time from a business perspective—quite the contrary. By getting out and shooting lots of shows you’ll not only sharpen your technical skills (concerts are, in my opinion, one of the most challenging things you could ever try to shoot), but over time you’ll also build lots of goodwill in the music industry.

And if you’ve read any of my books (like Shoot for the Stars, for example), you already know that one of the keys to success as a music photographer is to realize that everyone in the music industry is connected, like one big, huge family. So as long as you get out there and mingle, be nice, treat everyone you meet with respect, do quality work, and never stop grinding, eventually you’ll cross paths with the right people, and you’ll begin to sniff real success.

So to summarize, the real secret to making money with music photography is to:

So what do YOU think? Have you also struggled to make money with live music photography? Do you agree that the influx of “free” photographers has practically destroyed the industry, at least in terms of being able to make a living from it?

Sound off with a comment below and let’s discuss.